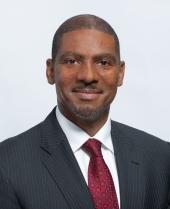 “The Center for Economic Empowerment and Equality’s mission is to deliver applied knowledge to underrepresented groups with the goal of reducing the racial wealth gap within our country.”

KARIM HILL is the inaugural Executive Director of The American College Center for Economic Empowerment and Equality.

Prior to joining The College to lead the newly created Center, Hill devoted two decades of his career to the financial services industry, spending many years at some of our nation’s biggest banks including Wells Fargo, Bank of America, Capital One, and Citizens Bank. In September 2020, he became a Board member and Interim Executive Director of BDC Capital Community Corporation, a consumer development financial institution focused on reducing the racial wealth gap in Massachusetts by deploying capital to underrepresented groups via term loans, equity investments, mezzanine loans, and financial based technical assistance. Some 80% of the capital raised has been distributed to Black business owners.

Since 2015, Hill has led the New England Business Association as its President and Chief Executive Officer, identifying gaps and fixing processes, as well as growing the organization’s membership from 399 member companies to nearly 1,600. As Foundation Market President for northern California at Bank of America, he managed a $1.5 million philanthropic budget for the company, and in a similar role as Foundation Market President for New York State at Capital One Bank, he oversaw its philanthropic budget.

Hill is the Co-Founder of the Black Vanguard Alliance, a former Board member for the United Way of Northern California, and a contributor for New England Blacks in Philanthropy and the New England Board of Higher Education. He earned a BS from Ohio University and an MBA from Florida International University’s Chapman Graduate School of Business. He is also Green Belt certified in Six Sigma Methodology, a quality and process improvement methodology.