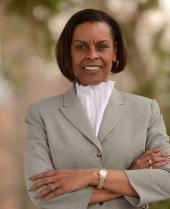 “The work of the Center for Economic Empowerment and Equality is a direct representation of The College’s mission and values, reflecting how we work to create solutions that benefit individuals and society.”

GWEN HALL is the Executive Vice President and Provost at The American College of Financial Services. In this role, she has designed the student experience portfolio as it relates to all aspects of the student journey, and is responsible for ensuring students receive high-quality support, services, and resources.

Before joining The College, Hall was Vice Provost for the American Public University System. During her tenure at APUS, she served as Chief of Staff in the Office of the President, Associate Provost of Academic Effectiveness and Student Success, Academic Operations Officer, and as Dean for the School of Security and Global Studies. She also served as a consultant to the Department of Homeland Security, where her work included homeland security strategic planning, infrastructure security, and resiliency planning for 18 critical infrastructure sectors.

Hall is a retired Air Force officer. Her last assignment was as Chief of the National Security Policy Division at Air Force Headquarters, where she led the team that designed and executed the Chief of Staff-directed Biological Defense Task Force initiative. Before arriving at the Pentagon in 2002, Colonel Hall was deployed to the Combined Air Operations Center at Prince Sultan Air Base in Saudi Arabia as Director of the Combined Forces Air Component Commander’s Action Group, examining Air Force command and control structures. She also taught at the U.S. Air Force Academy in the political science department.

Hall is a recognized national security expert who has researched and published numerous articles, papers, and book chapters. Her nuclear weapons study won the prestigious Air Staff award for “best overall project with direct relevance to the Air Force” and became mandatory reading at three DOD schools. Hall received a BA in Political Science from the University of Maryland, and an MA of Public Policy and PhD, both in National Security Studies, from the University of Maryland’s School of Public Policy.