President and CEO, The American College of Financial Services 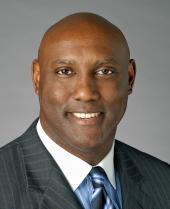 “Education is the key to prosperity, and the financial services industry is in a unique position to connect individuals with the tools they need to empower themselves and their communities.”

GEORGE NICHOLS III currently serves as the 10th President and CEO in the storied history of The American College of Financial Services. He continues to take motivation from founder Solomon S. Huebner’s pioneering vision in 1927, while empowering The College to usher in the next century of excellence.

President Nichols joined The College after a 17-year stint at New York Life, where he held principal roles in sales, strategic initiatives, and public policy. He most recently served as Executive Vice President in the Office of Governmental Affairs, which encompasses all the legislative, regulatory, and public policy issues at the company. In 2006, Nichols was named to the company’s Executive Management Committee, a group of senior executives tasked with assisting the CEO in setting company policy. Prior to joining New York Life, Nichols was Kentucky’s first African American insurance commissioner, leading the regulation of the state’s $10 billion insurance industry through his expertise in health insurance reform and financial services integration.

President Nichols was also the first African American president of the National Association of Insurance Commissioners and the first African American elected to New York Life’s Executive Management Committee. He has twice made the list of “Most Influential Blacks in Corporate America,” an honor given by Savoy, the leading African American business and lifestyle magazine. Because of his bold leadership in launching a Four Steps Forward plan to promote upward mobility and wealth creation for Black America, Nichols was honored as one of “The Ten to Watch in 2021” by WealthManagement.com. He received an AD in Sociology from Alice Lloyd College before earning a BA in Sociology and Economics from Western Kentucky University, and began his career in financial services after receiving an MA in Labor Studies from the University of Louisville.

President Nichols continues to lean on the love of his family—his wife Cynthia Jean (“CJ”) and three children—as well as his unyielding faith to navigate the journey that brought him to this distinguished institution.